Thirty years ago this summer, I attended the Fifth International Otter Colloquium in then-West Germany, where, for the first time, I formally presented results of my study to fellow otter researchers. In many ways, this month-long overseas journey was the peak experience of my life.

Since a fair portion of the story concerns otters only incidentally, it seemed more appropriate to write about it in my family blog. The specific postings can be found here (no login to the site is required).

To those who have repeatedly bugged urged me to write a book about my years with otters, it should please you to know that what you are about to read would surely have been one of its chapters.

The postings are unfortunately presented in reverse chronological order, however those who are already familiar with LiveJournal's format shouldn't find that to be a significant impediment. :-) On the other hand, approximate total reading time for the 29 posts is a daunting 45 minutes; maybe a half-hour if you don't dwell on the pretty pictures for too long. ;-)

After studying the behavior of the river otters of Trinidad Bay, California, for a quarter of a century, I saw my last otter there ten years ago today.

I guess I'm supposed to say something like, "It doesn't seem that long ago," but it really does feel as though it's been much longer than a decade. Seems more like a lifetime has passed since then, actually...

It ended so spectacularly badly, is it any wonder I've shoved it all to the back of my mind? It was literally a lutrine Shakespearean tragedy: treachery layered upon treachery, murder after murder of innocents, and in the end, all of the players – heroine and villainesses alike – died. Only I – the audience of the generations-long performance – was spared death, leaving the theatre haunted by a Cassandra-like story that no one else could possibly believe.

Occasionally, someone will say to me, "You should write a book about the otters." I always shake my head no. Why? Because I know it would be a wasted effort. Witness: my otter website – which does tell at least the happy parts of the story – gets almost no traffic, despite it having been online for seventeen years. My email address is on every page, but can you guess how many emails I've gotten this past year inquiring about my study, which was the longest and most thorough of its kind in the history of science? ZERO, down from a grand total of two emails the year before.

So why should I write a book on a subject that is obviously of no interest to anyone? I already feel like I threw away twenty-five years of my life for nothing. No. I will not waste any more of whatever time I may still have left, and furthermore, mostly for the otters' sake, I intend to take all of their dark, dirty secrets to my grave.

Saw otters last night at Trinidad for the first time in 23 months. What made the evening doubly special was that I was there to meet up with the fellow who first introduced me to Trinidad 31 years ago: Kent Reeves. He and his wife Heidi both looked terrific. As icing on the cake, also there was my first major professor at Humboldt State: Dr. Archie Mossman, and his wife, Dr. Sue Lee. It was quite a reunion!

Before the meetup, I got to see two otters: first, a young adult male, and then briefly an adult female made an appearance. I took some video of an aggressive encounter between the two. It was just like the old days: tussling, screaming, then the one who was attacked (the male) treading water and making a lot of splashing and fuss. Some things never change! I haven't watched the video yet; if it's any good I'll edit this post and embed it here later on.

Although otters aren't a part of my life anymore, I still have dreams fairly often in which I'm studying them. I do miss that, I must admit. I don't miss the heartache, though. All those losses from years ago are still significantly impacting me and my life. The tragic way things ended pretty much destroyed me. I don't think I'll ever be quite the same person as I was back then.

I suppose I should go to Trinidad tomorrow for the 30th anniversary of my first seeing otters there. My heart really isn't in it, though. Everything I knew and loved there is gone, even the old fishing pier itself. Otters haven't been a part of my life for over 5 years now. Can it be true? I never imagined that could happen; that it would all end like that. But it did, and there's no going back. So maybe I won't go tomorrow after all. There's nothing to celebrate anymore – only losses to mourn.

The newly reconstructed Trinidad Pier opened to the public at the beginning of July. I visited it for the first time yesterday evening.

The design is attractive and functional. The railings are all aluminum, and the deck is a continuous solid slab of concrete that slopes slightly downward from west to east and from south to north to allow for drainage.

So now, not only is my otter family gone, so is the entire old pier from where I made all of my observations. Every physical trace of my former life with otters is now vanished off the face of the earth...

I didn't see any of the beasts yesterday evening, but I ran into one of my old otter-spotter friends, and she reported that she has seen the otters often this summer; as many as 10 in one group. Based upon some of her behavioral descriptions, I think it's highly likely that Slick is still alive! Excellent news! I really wish I could visit Trinidad more often, but I'm poor as a churchmouse now, and there's no way I can afford to make the trip, even just once a month. Hopefully, I'll get to see some otters sometime this summer. It's been almost a year since my last sighting.

I saw a family of 6 otters this evening! Here's a short video of 5 of them swimming toward the pier:

That's the elder matriarch at front left, an adult daughter at her side, and three pups of the year behind the females. (I don't know if they are all the old mother's or a combining of two females' litters.) The sixth individual was Slick, who had already come over to the pier by himself about a minute earlier. :3

I saw otters at Trinidad this evening! First sighting since last September. It was the family – a mom, two juveniles (one of which was a pup of the year), and a companion who I'm 90% sure was Slick. (He would be 9 this year.) Didn't see much of the second juvenile, but I think it was more likely a yearling than a pup. Just missed getting to touch Slick on the nose under the dock (eating in his usual spot, as always), and I probably would have succeeded if I didn't have my dog with me. Anyway, it was a big thrill to see them! First time this summer, but hopefully not the last. :3

I just saw wild river otters at Trinidad for the 4,800th time! Or maybe this evening's sighting was #4,801. Whatever, it's been so long since the last time, I've kind of lost count...

Anyway, what I saw was clearly an extended, multi-generation Family grouping. You might think that after not seeing otters for so long, I might not be able to tell what was going on, but after only a few minutes observing the group, I could tell with certainty that it was comprised of a matriarch accompanied by two adult female daughters, and two yearlings of indeterminate sex. There were no pups of the year with the Family.

Although I have no way of knowing for certain, I also have no reason to doubt that this new matriarch is the same alien female who colonized this harbor in 2007, after the resident family I followed for 20 years snuffed itself out. If the 2007 female is, indeed, the reigning matriarch now, this present state of affairs is a genuinely glad outcome. I do confess to being a bit troubled by the evident lack of offspring this past season, but on the basis of my own brief observations, and anecdotal accounts by others reported over the summer, it does appear that Trinidad Bay is once again home to a stable, resident otter population. And, for that scant knowledge alone, I am truly happy!

This otter almost looks like something out of the Pliocene to me. It's good news, anyway! :3 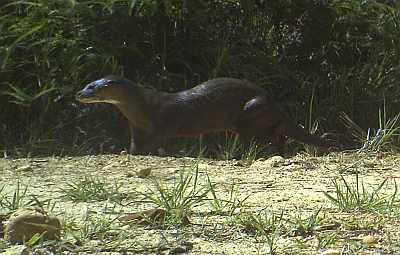